Stop Pretending To Be Mediocre: A Short Manifesto…

“Your talent is God’s gift to you. What you do with it is your gift back to God.” — Leo Buscaglia 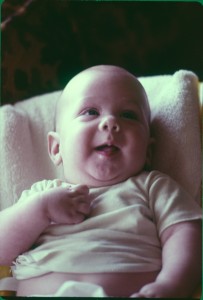 Me As A Baby

My mom didn’t love me.

She was, however, clearly threatened by me. Years 0-16 were filled with a steady diet of Mom’s manipulations and mixed messages.

Off-balance. Confused. This was how I felt around her. More importantly, this was how she wanted me to feel.

And although it’s awkward to start a blog post with this bit of personal background, I have to say I’m grateful to her. She taught me the truth about the lengths that other people will go to keep you non-threatening. The sad, unspoken truth about being the best version of yourself is…

…it’s terribly lonely. This is the sad truth that everyone knows but no one says aloud.

The overweight person who self-sabotages his diet with the illicit stash of snickers knows this. The middle manager who talks of nothing but the misery of her job but does nothing to change things knows this. Every single person who goes to sleep with the sad realization that they’re not using their talents knows this.

It’s comforting to stick to the failings we know. Why venture into territories where we could fail or more importantly, lose our friends, our family and bearings?

Because the truth of the matter is that once we acknowledge the genius that’s inside of all of us, there’s an obligation to that genius. That’s why it’s so much easier to worry about our weight, our constant stream of bad relationships or poor decisions.

And aside from the just general “best practices” approach of being the most amazing person you can be, the recession has made being anything else an economic death sentence. Let me explain…

…look around at the economy. We’re seeing a shift away from the TV-industrial complex, as Seth Godin says. In the time from the 1950s until a few years ago, success could be guaranteed by having more cash than the next guy. Produce a shitty product, spent a shitload of money and you have a hit. Of course, it’s soulless and without passion but why let that stop you?

That economy got critically injured in 2009 and it’s slowly dying every day. Have you seen the fate of shitty, stupid companies? Good Guys? Gone. Blockbuster Video? Gone. Circuit City? Gone. GM and Chrysler? Should be gone.

The same thing is true for people looking for jobs. Before 2009, if you had a decent resume and sent out enough of them, you could probably score a job relatively easily. Not now. There are legions of 99ers, folks who’ve been out of work for 99+ days.

The simple point is: if you’re not bringing all of yourself to the table, either as a business owner or a potential employee, you’re in trouble. We don’t have the luxury we did a few years ago where we can camouflage ourselves as a non-threat to the folks who worry about such things.

The only way forward is to be excellent. To be astounding. To inspire jealousy among the stupids. To state publicly and unequivocally, “Fuck you. This is who I am.”

A few years back, I had a computer programmer friend who was out of work. When I asked him what computer languages he knew and what his skills were, he’d say “I’m alright at PERL.” Really? That’s it? That’s all you have to say for yourself? What are you fucking amazing at? What can no one touch you? What makes you not a commodity?

A friend who works at a staffing company tells me about the hundreds of resumes they receive each day. Most have no cover letter. Most lack any passion. Most don’t even bother to read what the job they’re applying for is.

In the end, being amazing is the only way to go through life. Sure, you’ll burn off folks like my mom but they’re not really worth your time. Go forth and be yourself.

If you're new here, you may want to subscribe to my RSS feed. Thanks for visiting!

Sadly I have had incredibly negative experiences w...

Seconded, my good man. Cutting back on your market...