Tabletop Confirmation: Are You Showing Off Your Accolades?

Last night, with a few hours to spare before our concert in L.A., my friend and I debated where to eat. Our first search was, of course, on our Yelp! iPhone app.

Yelp’s #11 best restaurant in L.A. was Jitlada Thai Restaurant, an mid-range hole-in-the-wall in a strip mall. From what the 448 reviews said, it was reasonably cheap, authentic and amazing. In other words, exactly what we wanted.

When I arrived though I was amazed at the quality of marketing that was going on in this restaurant. On one wall, an autographed sketch from Matt Groening, the creator of the Simpsons. Next to that, reviews from Food & Wine. Next to that, features in the LA Weekly. Wall to wall accolades. And it didn’t stop there.

When we were seated, we were greeted with this: 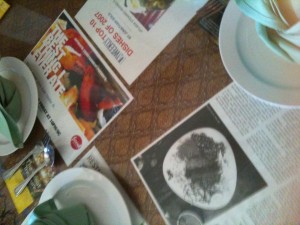 Not only had they covered the walls with confirmation that you were eating at the right place but the tabletops confirmed it as well. On every single table was a review from the LA Weekly and a flyer from the Food Network’s “The Best Thing I Ever Ate” show which had featured Jitlada in one of their episodes.

P.S. The food is amazing. Try the crab and pumpkin curry.

If you're new here, you may want to subscribe to my RSS feed. Thanks for visiting!

Sadly I have had incredibly negative experiences w...

Seconded, my good man. Cutting back on your market...